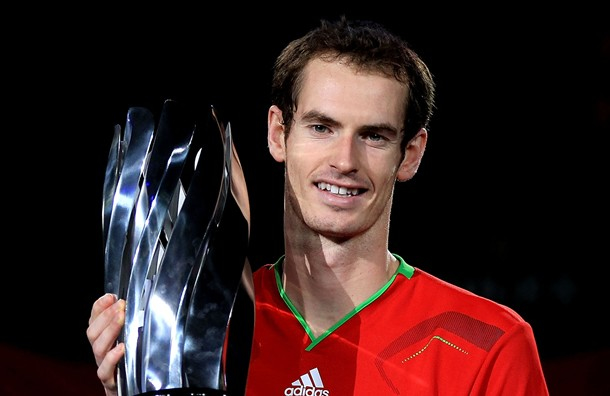 The Scot had too much for the Spaniard and overtakes Swiss maestro Roger Federer in the rankings, moving into his highest position since March 2010.

Murray broke Ferrer in a lengthy opening game as he looked for a repeat of his win over the same opponent in Tokyo last week.

But a couple of loose backhands in the next game put Ferrer back on level terms.

The man from Alicante was growing into the match, and the Scot was finding it tough to make any impression on Ferrer’s serve.

That was until the eleventh game when the 29-year-old lost his cool, hitting several poor shots before producing a double fault on a break point.

Murray took full advantage to take the set 7-5 and take control of the match.

The Dunblane ace changed his shirt at the interval but there was no change in momentum as he broke Ferrer in the first game of the second set.

But just as in the first set, the Scot was pegged back immediately due to two particularly sloppy ground strokes.

Murray reclaimed the break with a wonderful forehand lob on the run before pressing home his advantage to take a 3-1 lead.

The 24-year-old was finding his range with his back hand but saw two break points go astray in the fifth game of the set.

Murray was turning the screw, forcing Ferrer to hit four or five great shots to win each rally.

The Spaniard missed a smash and Murray was even able to hit a mid-court volley in a bizarre sixth game, which edged him closer to victory.

However he was unable to stop Murray claiming the set 6-4 and wrapping up victory in one hour and forty-six minutes.

It’s been one of the best runs of my life,” Murray said at the trophy presentation ceremony.

“I’ve played very, very well in the last few weeks. I was very nervous today because I wanted to win and defend my title but I’m very happy I came through.”

Speaking about overtaking Federer, he told Sky Sports: “It’s not something I aimed for at the start of the year.

“You want to try to finish at number one if you can.

“After the US Open that wasn’t possible. I needed to reassess my goals.

“I wanted to finish the year at three if possible. I haven’t done that before.

“That still isn’t complete. I’m still going to have to win some more matches to do that.

“But the last three weeks have been very good. I’ve had a good mindset and fought really hard in all the matches.

“Here I got a bit tired but I wanted to keep the run going.

“I’m really happy with the way I’m playing and hope I can keep it up for the rest of the year.”