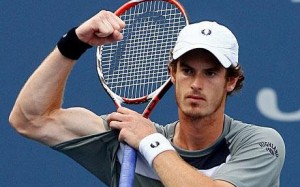 Pato Alvarez has been involved in tennis as a player and coach for the last half century, so it’s fair to say he knows a thing or two about the game.

“I was the national coach of Spain for 16 years, and Andy Murray is the best player I ever worked with,” Alvarez told me.

That’s quite an introduction from one of the best-known names in the game. But it got even better.

“You can’t go wrong with Murray. He’s the best there is. He’s a better player than Nadal and the other top guys.”

So there you have it.

Andy Murray is the best in the world… according to a man who has seen more tennis players than you and I have had hot dinners.

Colombian by birth, Alavez took on Spanish citizenship and became Murray’s coach when a raw, nervous 15-year-old from Dunblane arrived in Barcelona in September 2002.

The Sanchez-Casal Academy sits in the outskirts of Barcelona, not far from the airport, and boasts a school, a fitness and rehab centre, and, amongst many other top-class facilities, 27 tennis courts on a variety of surfaces.

I spent a day there talking to some of the staff and students and getting a feel for the centre of excellence that tempted Murray to give up the comforts of home.

Not that he was the only top name to do so; the former French Open champion Ana Ivanovic trained there. And to get ready for the upcoming event at Roland Garros from 17 May until 5 June, another former winner and ex-pupil, Svetlana Kuznetsova, is back there now.

The Academy is a place – and an experience – Murray will never forget. Indeed, he credits it with developing him into the player he is today.

“It’s the best decision I ever made in tennis,” he told me when we spoke recently in Barcelona. “It wasn’t the easiest, or nicest, decision to have to make – to leave home at 15 – but it was the right thing for me, something I needed to do.”

And he hasn’t looked back since.

The two years spent in Barcelona helped the young Scot mature as a person as well as a tennis player, and the Academy directly paved the way for him to win the US Open junior title in 2004, the platform from which he then turned professional the following year and began his rapid rise up the world rankings.

All of which came as no surprise whatsoever to the Academy’s president and co-founder Emilio Sanchez Vicario (whose little sister Aranxta was no stranger to Grand Slam success).

He said: “He was very quiet and shy when he first arrived.

“I remember trying to push him around the court the first time I hit with him, to see how he would respond. No matter what kind of shot I gave him, he always found a solution.

“That was when I realised how talented he was.”

Sanchez Vicario got the Academy up and running in 1998 with the twin aim of developing top-class players who would also be well educated at the on-site Schiller school.

He works with some of the best coaches in Spain – and takes in youngsters from all over the world.

Ten-year-old Francesca Jones from Yorkshire was hitting the ball harder than most adults could, from my courtside vantage point, and already talks a good game.

“It’s all about focus and intensity here, which I like,” she told me, before adding: “My aim? Well, it has to be to get to world number one.”

And that lofty position is one which Alvarez and Sanchez Vicario both believe Murray has the potential to occupy, if his desire doesn’t dip.

Both men also think he’ll do well on clay this season and will be a real contender at next month’s French Open, an opinon shared by the current world number one, Nadal.

“Andy has all the shots. His movement is great,” said Nadal.

“I don’t see any reason why he won’t have a fantastic clay court season.”

Murray himself has taken great heart from the way he played in Monte Carlo where, for the first time, he managed to take a set on clay from Nadal.

He has regained his form and confidence after his post-Melbourne slump, and despite the annoying elbow injury that made him withdraw from the Barcelona Open, Murray’s fully recovered and is now in Madrid for the first of two Masters Series events which precede the season’s second Slam at Roland Garros.

Helping him get ready for the French is Dani Vallverdu, another Sanchez-Casal connection.

Vallverdu, who went on to play for Venezuela in the Davis Cup, was the first person Murray practised with in Barcelona back in 2002.

Their dorms were close to each other too. They’ve been best friends ever since, and Vallverdu has been part of Team Murray since last year’s US Open.

Other friendships forged in Barcelona endure to this day. And the tennis teachings he took on board helped create a world-beater. So it’s little wonder the Sanchez-Casal Academy has such a place in Murray’s heart.

It’s now up to him to prove his old coach right and become the very best player on the planet.