Fleming & Hutchins through to round two in Melbourne 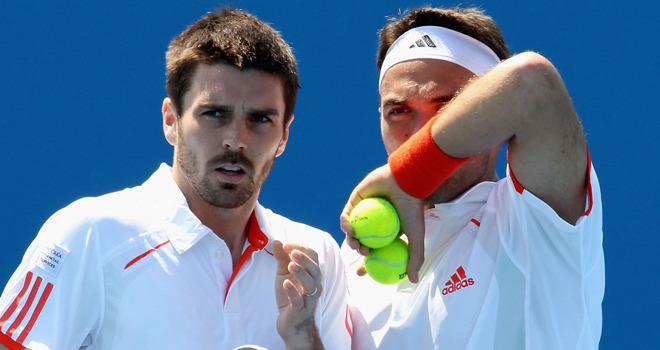 The Davis Cup pair progressed to round two thanks to a hard-fought 7-5 7-6 (7/2) victory over Americans Ryan Harrison and Ryan Sweeting.

Seeded 15th Fleming and Hutchins will next face Alex Bogomolov Jr and Igor Kunitsyn, of Russia.

In the women’s doubles, Laura Robson suffered further disappointment as she and Australian prodigy Ashleigh Barty lost to the more experienced pairing of Dominika Cibulkova and Jill Craybas.

Robson, thrashed in the singles by Jelena Jankovic, and 15-year-old Barty fought hard but could not prevent a 3-6 6-2 6-3 defeat.

Jamie Murray and Ken Skupski are the other British representatives in the men’s doubles, although they are not playing with each other.

They will open their campaigns on Thursday, as will Anne Keothavong, who is playing with her singles conqueror Mona Barthel in the women’s doubles.