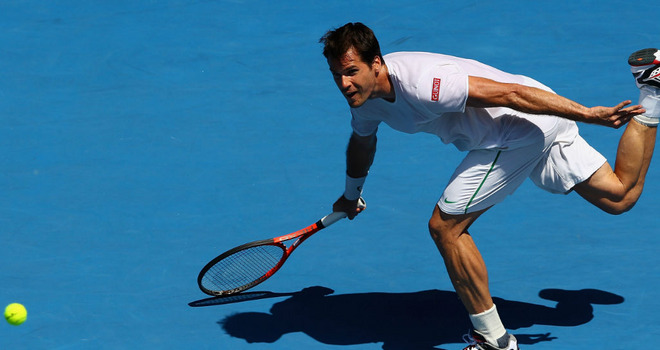 German tennis veteran Tommy Haas has admitted he has to question his future in the sport after his straight sets loss to Rafael Nadal.

With only three months until his 34th birthday, Haas has revealed that he is considering whether he wants to continue playing with the gruelling challenge of the men’s tour.

Haas, who turned professional 16 years ago, reached the height of his career in 2002 when he secured the world No.2 ranking before a series of shoulder operations triggered demise in his fortunes.

However, despite still feeling like he could compete at the top level during his Australian Open second round encounter with Nadal, Haas admits a future in the sport may not be possible.

“When I play at certain moments like I did today, I feel like I can definitely still play with some of the big guys and maybe still have some success,” he said.

“That’s the challenge that I have to ask myself, if I’m still willing to do that after so many injuries, after being on the road now for 15 years, and if I still want to do that.

“So these are discussions I have to obviously have for myself, with my team, with my family, and then see if it’s going to be worth it.

“That’s a big question I have to see for myself. That’s going to be very interesting what happens in the next I guess three, four, five months.”

Haas is currently ranked 190th in the world but has had a protected ranking at number 20 after being sidelined with injury.

However, with his protected ranking due to expire in the near future, his only hopes of competing in major tournaments will come through wildcards.

As a result, the German is now pondering whether that is how he wants to end his illustrious career.

“You only get you ranking protected for so long and you only have a few chances to play in the main draws,” he added.

If Haas is unable to secure wildcards then he would have to compete in qualifying and challenge matches to merit a place in tournaments.

With his future in doubt, Haas acknowledged he making the most of occasions such as his clash with Nadal on Wednesday.

“These are the moments when you play in Rod Laver Arena that’s great, against one of the greatest, that’s obviously awesome,” he said.