Movie Review: all for nothing, nothing much for all

Movie Review: The Three Musketeers Is All For Nothing, Nothing Much For All 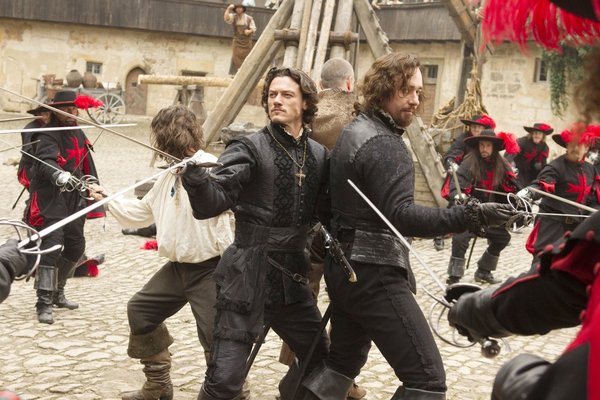 Review in a Hurry: When director Paul W.S. Anderson and Milla Jovovich try to get Resident Medieval, it’s all for nothing, nothing much for all. If you’re just looking for some elegant production design in subpar 3-D, it delivers that. But you can probably find a cheaper way of enjoying such things than the price of a current movie ticket. Like maybe a View-Master.

The Bigger Picture: Going into this movie expecting a faithful adaptation of Alexandre Dumas is like watching the Adam West Batman TV show and becoming upset that you didn’t get Christopher Nolan.

Rest assured, this movie’s low grade isn’t due to its lack of fealty to source. In fact, when Jovovich acrobats herself through what appear to be infrared anti-theft beams, with utterly no explanation of how such things can exist in pre-technological times, it’s one of the highlights of the film. And yes, the airships are reasonably cool. Anderson certainly thinks so, anyway, as the entire movie is a set-up to get people in them, at which point he cribs blatantly from The Wrath of Khan.

Other barely disguised steals include the rooftop swordfight from The Crow, and a significant line of dialogue from The Princess Bride. We know Anderson doesn’t much care for coming up with his own material, as with few exceptions, his filmography consists of video-game adaptations and remakes. But couldn’t he have appropriated something more akin to the milieu…Barry Lyndon, perhaps? To his dubious credit, he has picked out a theme song that’s just a bad as the Rod Stewart/Bryan Adams/Sting number “All For Love” from the 1993 Disney version of this same tale.

What tale, you ask?

The premise is familiar: young swordsman D’Artagnan (Logan Lerman) wants to join the famous Three Musketeers (Matthew Macfadyen, Luke Evans, and Ray Stevenson), and like them, winds up falling afoul of Cardinal Richelieu (Christoph Waltz), who is secretly plotting against the king of France with the aid of England’s evil Duke of Buckingham (Orlando Bloom). Using both sides against each other is the aptly named “Milady,” played, naturally, by Anderson’s #1 lady Jovovich.

And that’s it, really. The characters just sort of hang around the general palace area until it’s airship battle time. Plus, like the Resident Evil sequels, this movie doesn’t end with any closure—it just delivers a hook for an unlikely-to-be-made sequel that promises more than it can deliver. Anderson’s fond of using 3-D to show off explosions of splintering wood and dust, but aside from that there’s little to recommend the process; barely even much sword-pointing into the audience, which ought to be a no-brainer.

The 180—a Second Opinion: The actors are all perfectly fine, but it would be nice if somebody had thought to give them something to do. Other than Milla, who swings sexy stunts as always.