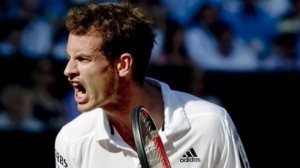 Andy Murray came from a set down to defeat Daniel Gimeno-Traver in his first match at Wimbledon.

Heavy rain in SW19 meant that the roof was used at Centre Court and there appeared to be a cloud over the British number one but after an initial setback he found his stride to secure his place in the second round.

Murray began slowly and Gimeno-Travers serve was sound from the start. The Spaniard, ranked 59th in the world, made inroads in the ninth game when he forced three break points, taking the third to go 5-4 ahead before serving out the set.

The second set appeared to be just as troublesome for Murray but in game eight, the Scot finally took his sixth break point and didn’t look back as he levelled at one set all and then raced to a 5-0 lead in the third.

A break to allow Gimeno-Travers to have treatment on a knee injury interrupted Murray’s sprint but after the restart he wound up the set 6-0 and kept the pressure on.

The fourth saw Murray hit top gear and he capitalised on every error from his opponent, in addition to producing a variety of winners. Another bagel made it 15 games in succession and a bumpy start was easily forgotten as he took what was eventually a comfortable win.