Murray through to last eight of Miami Masters 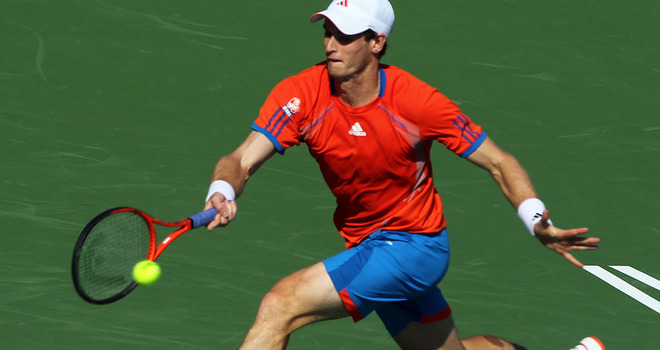 Andy Murray marched into the quarter-finals of the Miami Masters after maintaining his dominance over Gilles Simon with a straight-sets success.

The British No.1 was in ruthless touch as he sped to a 6-3 6-4 triumph – his ninth successive victory over the Frenchman – to reach the last eight of the ATP 1000 Masters event.

There he will face ninth seed Janko Tipsarevic of Serbia and a meeting with Rafael Nadal may be on the agenda if he reaches the last four.

Such a straightforward fourth round victory over Simon

did not seem likely in the first game when only the third point of the match was a 40-shot rally, won by Simon.

The French 13th seed brought up his first break point in that same game with a backhand down the line which was centimetres in but he could not take advantage.

After holding for a second time, Murray

then broke to love for a 3-1 lead and from there on had little trouble serving out the set.

Both players had performed well in the opener with some superb shot-making but Murray had been far more reliable, moving Simon from side to side.

The match went with serve at the start of the second set before in the fifth game Murray brought up triple break point with a superb cross-court drive, but the Frenchman managed to dig himself out of the hole to hold.

After holding Murray again moved to triple break point and after the second time of asking the Scot broke.

A scooped shot that flew over Simon’s head then made it 5-3 and although Simon held in the next game, Murray forced three match points, seeing out the match with an ace in a repeat of the climax to the first set.

Serbian Tipsarevic awaits in the last eight after he posted a hard-earned 7-6 6-3 victory over unseeded Bulgarian Grigor Dimitrov.