Nadal books place in the final 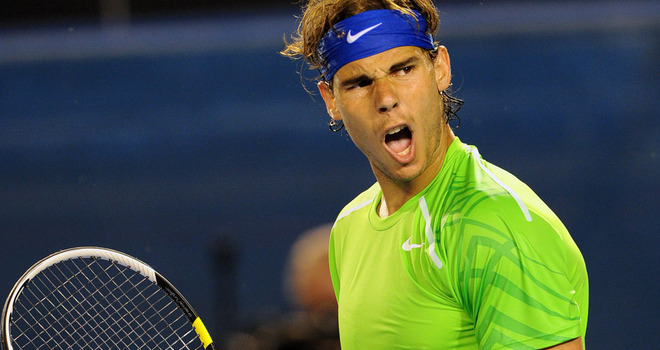 won a tense tie-break to draw first blood, but Nadal

stormed back to clinch the second set 6-2 and level up the match. The Spaniard then edged a third-set tie-break to go two sets to one up before taking the fourth 6-4 to close out victory.

The two giants of the men’s game were expected to produce fireworks under the Melbourne lights on Australia Day. And they didn’t disappoint in an epic opener which lasted 56 enthralling minutes.

Federer was out of the blocks quickly, producing some imperious tennis to break Nadal in the second game en route to a 3-0 lead. But the Spaniard held his nerve and gradually found a foothold in the match, breaking back in the seventh game.

Both men then regained dominance on their serve to take the opener into a tie-break.

Federer produced a magnificent deep forehand volley and a sublime backhand half-volley to give himself three set points at 6-3 in the break. And although Nadal saved two – one with a ridiculous forehand – he was long with a backhand on the third.

The second set opened with back-to-back love breaks, and then went with serve until Nadal went into overdrive at 3-2 up.

First the Spaniard produced an incredible forehand get to headline a crucial break of serve, and then held for 5-2.

After a brief break for a firework display Nadal continued to produce his own on-court pyrotechnics by breaking Federer to love again to clinch the set 6-2.

The third set went with serve to 3-3, when Federer broke for a 4-3 lead. But Nadal hit back immediately to send things heading towards the inevitable tie-break.

Federer’s increasingly regular errors gave Nadal the early advantage and he raced into a 6-1 lead in the breaker. And though Federer fought back gamely to 6-5, the Spaniard held his nerve to close out the set.

The fourth set went with serve until the ninth game, when Nadal – who had created several opportunities in Federer’s earlier service games – finally found a way through.

Nadal had to save two break-back points – one thanks to an outrageous lob that landed on the baseline – when he served for the match, but eventually completed victory on his second match point when Federer sent the ball long.