Nadal pulls out in Miami 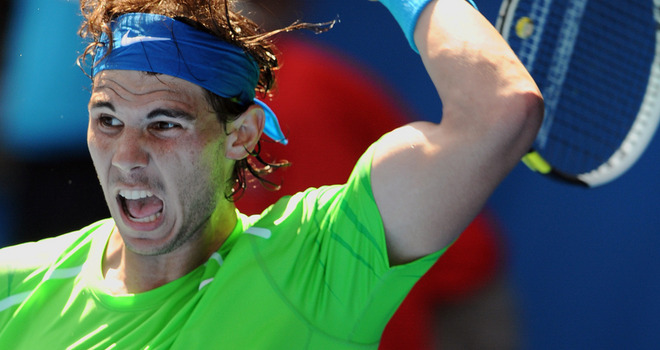 Andy Murray will play Novak Djokovic in his third final of 2012 on Sunday after Rafael Nadal withdrew from their Miami Masters semi-final with a knee injury.

The British number one was due to play Nadal in the last four on Friday.

But the Spaniard pulled out two hours before the scheduled start, saying: “I take no pleasure from this but I cannot go on court and lie to everybody.”

The Serb only lost eight points in the first set but Monaco battled back in the second, forcing Djokovic – who served for the match at 5-4 – into a tie-break before the defending champion sealed his progress on his second match point.

Nadal, 25, has suffered with knee problems throughout his career, retiring from the 2010 Australian Open quarter-final against Murray with a complaint in his right joint and missing more than two months of the 2009 campaign, including a defence of his Wimbledon crown.

This time it was the world number two’s left knee, which had already hampered him during his quarter-final victory over Jo-Wilfried Tsonga.

“It looks like it’s nothing really different than happened a few times in the past,” Nadal added.

“Hopefully with a few days off and with the right treatment, I will be in the right conditions to start to practice on the clay.”

Nadal, a six-time winner of the French Open, still plans to start his clay-court season at the Monte Carlo Masters on 16 April.

Murray, who won in Miami in 2009 after beating Djokovic, was disappointed not to be able to put his game plan, worked out with coach Ivan Lendl, to the test after his second walkover of the tournament.

Canadian Milos Raonic pulled out of their third-round meeting earlier this week with an ankle injury.

“I have been working with Ivan now for a couple of months, on certain tactics that would work against Rafa, Novak and Roger,” said the Scot. “It would have been nice to see whether or not those things were working.”

The Scot has dropped just one set – against Janko Tipsarevic in the last eight – en route to the final and said he was relishing the prospect of testing himself against Djokovic.

“I think both of us were quite immature at the time though; now we are very experienced on the tour. It is always a good test to play against the number one in the world to see where your game is at.”

Murray is hunting his second title of the year, after beating Alexandr Dolgopolov in the Brisbane final in January. Play is due to begin at 1730 BST on Sunday.