Andy Murray set to return in Madrid after elbow injury 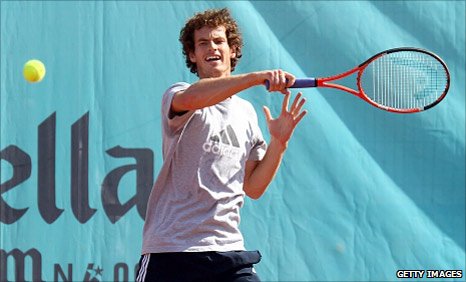 Andy Murray is set to return at this week’s Madrid Open after revealing he has been able to practise for the last week following an elbow injury.

Murray pulled out of the Barcelona Open in April after suffering the problem in Monte Carlo last month.

But he has returned to fitness in time for this week’s Masters 1000 event in Spain, where he is the fourth seed.

“I went over to Barcelona and tried to practise on the Tuesday after Monte Carlo and it was a bit sore still so I took five or six days off.

“I was able to do all sorts of training, I just couldn’t hit, and then I built it up every day and I’ve been practising since Sunday.

“I’ve got the right mentality just now and that’s something I’ll have to keep up.”

Murray has a first-round bye in Madrid and is seeded behind Rafael Nadal, Novak Djokovic and Roger Federer.

The British number one won the tournament in 2008 when it was played on hard courts rather than the current clay surface.

His preparation for the event has included work with Australian Darren Cahill, the former coach of Andre Agassi and Lleyton Hewitt.

Murray has been without a full-time coach since splitting with Miles Maclagan in July 2010 and also parted company with part-time consultant Alex Corretja in March.

He is working with the likes of Cahill and Sven Groeneveld on a part-time temporary basis with both coaches involved in sponsor Adidas’s player development programme.

Murray reached the semi-final in Monte Carlo where he lost to Nadal, which was a welcome return to form after he failed to win a single set in three tournaments after reaching the Australian Open final in January.

“There are things I can improve upon from that match in terms of where I was with my game before Monte Carlo.

“That was a big step in the right direction. I practise with Rafa quite a lot. I enjoy playing against him.

“I feel I can definitely compete against him and even win against him, but it’s a very difficult thing to do because he’s one of the best players of all time. It’s difficult, but I think I can get there.”

Murray will meet either Frenchman Gilles Simon or experienced Croat Ivan Ljubicic in the second round.

Murray has won five of his six meetings with Simon – including in the 2008 Madrid final and also in Monte Carlo last month – while against Ljubicic, the Scot has a 3-3 record.

“I’ve played both of them quite a few times,” commented Murray.

“They are pretty different players, Simon’s more solid, very quick and doesn’t make many mistakes, and Ljubicic has a big serve, probably makes more mistakes but probably has a bigger weight of shot, so they’re both very different.

“I think Ljubicic has got a very good record against Simon, I don’t know if Simon has won against him, maybe once, but it’s an interesting match. The altitude should probably help Ljubicic a little bit.”

Ljubicic has won three of his four meetings with Simon, although the Frenchman emerged victorious in their last clash which came in the Paris Masters event in 2009.

Meanwhile, defending champion Nadal has said that he will have to be at his best to get through a tough draw and cope with the faster conditions in Madrid.

The world number one has a bye into the second round where he is likely to meet former Australian Open finalist Marcos Baghdatis in his opening match with former US Open champion Juan Martin del Potro and either Juergen Melzer or Andy Roddick all potential opponents later in the tournament.

“The draw, without doubt, was not favourable. It was pretty negative,” reflected Nadal.

“In a tournament of this importance, all the best players in the world are here and you cannot expect an easy draw because it rarely happens.

“Obviously I have a difficult draw and I will have to play at my best.”